Erste Group contacted us based on great references from its subsidiary Česká spořitelna, which has worked with Virtuplex for years – most recently to develop a Prague branch of its Erste Premier brand.

Erste was one of our first customers and we used their projects to learn how to extend the capabilities of our technologies. This is not just about the design and floorplan of a new branch or office, but we developed a whole new approach to customers.

The placement of furniture, colour palette, materials, and lighting play an important role in customers’ decision-making in any space. However, it’s not always possible to fine-tune the details before the space is actually built. Erste Group has invested significant resources into subsequent changes to make the customer feel at ease. That is the reason they wanted to develop an office in Virtuplex’s virtual reality environment first as it can transpose a 3D model of a proposed branch office into 1:1 virtual reality according to the demands of the client and potential customers, eliminating errors that could appear after construction. 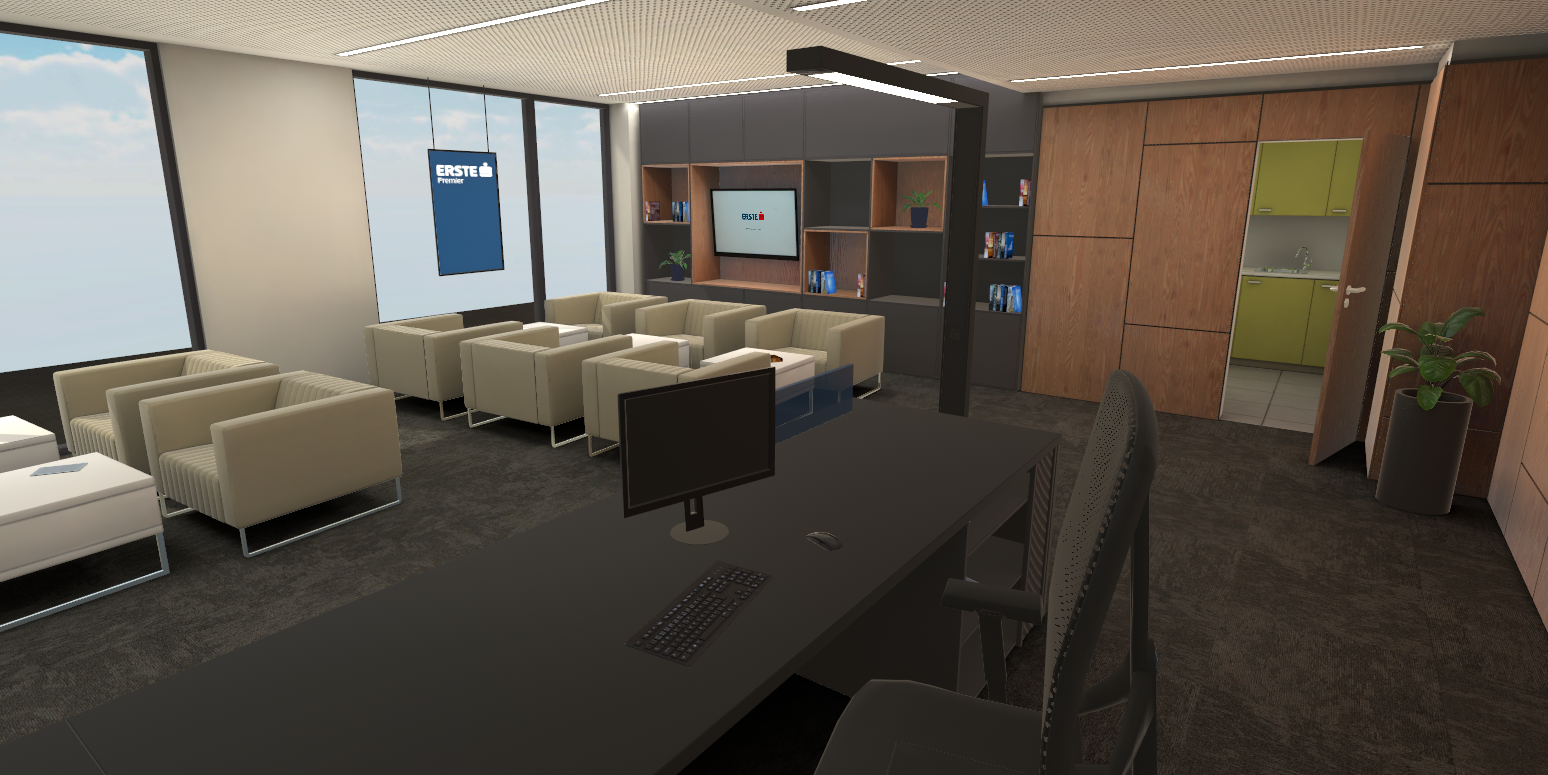 Virtuplex designed bank branches in virtual reality for subsidiaries in the Czech Republic, Hungary, Romania, Serbia, and Slovakia. Potential customers toured the proposed branches in virtual reality and evaluated the design, user pathways, and offered suggestions for improvements so the offices won’t need adjustments after they are built. The testing was administrated by our partner Ipsos.

By using virtual reality, Česká spořitelna was able to examine the ergonomics of every workplace and possible situations before the renovation starts. Customers were allowed to try everything and remove errors that otherwise would only have been seen after the end of construction. Most typical situations that would take place in the branch thus are role-played in virtual reality first, creating a standard that is now used to evaluate other branch offices.

The fine-tuning of the branch office concept would also take much longer without the use of virtual reality. This not only saves months in terms of time, but also costs as its very likely subsequent construction work to remove errors in design would swallow significant resources. The ability to refine the ergonomics of the new office in virtual reality saves Česká spořitelna up to 90% of these costs. The bank also plans to use virtual reality in the future when designing the interiors of branch offices, especially for complicated spaces such as a segmented floorplan with nooks, or when creating a whole new concept.

“We were very satisfied with the creation of Erste branches. Virtuplex fulfilled all our demands in terms of the promised deadlines. They were also very flexible and helpful, doing great work in designing the branches, and they were all refined to the last detail. Also, all our demands, including those exceeding our original agreement, were resolved very professionally. Virtuplex has a great team of very friendly people who are always willing to help. That is why we would certainly recommend cooperation with Virtuplex,” Erste Group Bank AG’s Iva Jarešová said.

“Before, it took up to a year to fine-tune a concept. Then after the renovation was finished, we’d see that tables prevent movement, or that the discreet zone isn’t big enough, for example. We had to undertake subsequent adjustments costing hundreds of thousands. Thanks to virtual reality, we can do this much faster, and the size and location of individual elements can be refined ahead of time,” Česká spořitelna innovation expert Robert Šourek said.